Emboldened by my “success” with the Ogre Trooper, I decided to stick with the ogres for the moment.  I have the big “limited edition” Ogre Mercenary to look forward to, but I wanted to stick with the Drazen faction.  Also, I want to get familiar with shading and wet blending before I take on a larger piece like that.  So I decided to go with the Ogre Delver instead.  I just love this sculpt.  It’s very lively and energetic.  It’s also pretty hard to find now, so I was taking a bit of a risk painting it early. 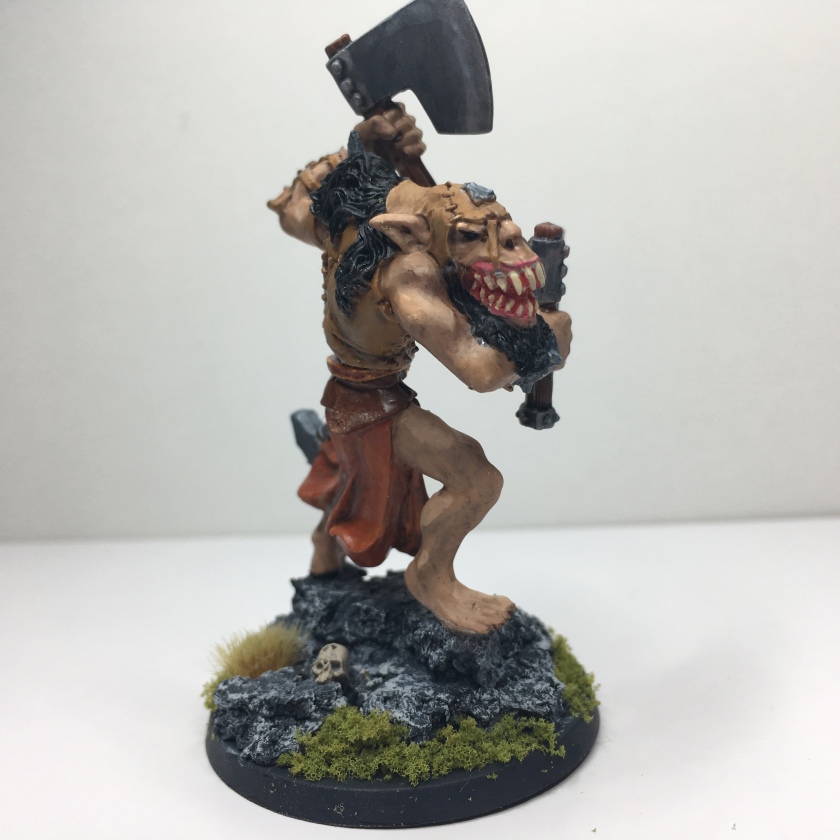 The hands with hand axes are separate elements.  The space for the join was pretty small and I decided simply to glue them with Zap-A-Gap instead of pinning them.  That was a dumb idea.  At least three times during the painting process I wound up squeezing downward on an arm and having it pop off.  And re-gluing while in the middle of painting is a pain in the ass.  At some point, I’ll need to pin these on properly.  At the moment, though, he’s sitting quietly in my finished minis box, perpetually snarling.

One thing I like about this sculpt is the texture variation and layering.  He had a weird pad under his left arm that I decided to make into a bloody bandage.  The teeth are pretty rough.  In general, I struggle with that kind of high-contrast detail work.  But I love the way his leather armor turned out and this base was really fun to do.  I picked up a baggie of resin skulls, so I got to give an added dose of creepy.