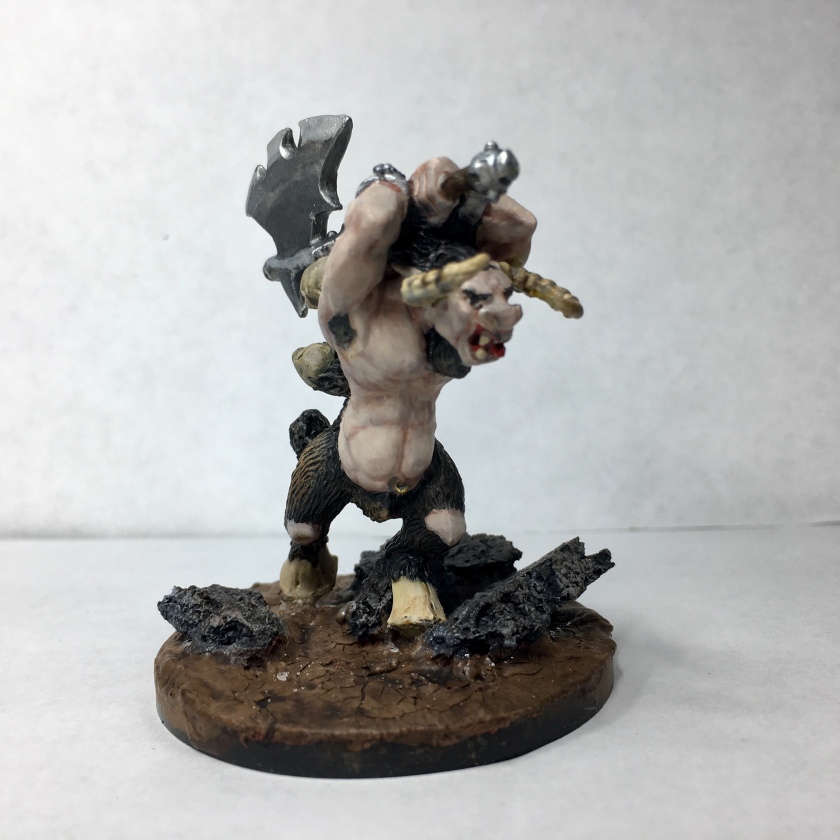 It’s been a while but I’ve got a batch of minis painted over the holidays to post. I was away from my desk, but brought my tools and tried to squeeze in as much painting time as I could. I’m on to Ahmut’s Legion now. There is still the Drazen’s Hill Giant sitting on a counter in my apartment waiting to be repainted after I stripped the old primer that was giving me so much trouble. I’ve decided that I’m done with brush-on primers for the future. Maybe it’s my technique, or just a bad batch. But even when I’m careful, I can’t seem to avoid getting foam and bubbles in the application, which turn into blemishes that can’t be painted around. This piece, in particular, gave me fits. In frustration, I wound up scraping the primer off the hooves and spot applying it to get a decent base layer to work from. I’ve decided I’m going to try Dupli-Color sandable automotive primer…at least until I go all-in and buy an airbrush setup. Dupli-color seems to be a cheap and well-regarded favorite on hobby boards and blogs. It’s a shame because, bubbles aside, I really like the texture of the Vallejo primer and the way it holds paint. But I can’t stand painting fucked up minis anymore.

A lot of the reference photos for this guy really emphasize the muscle tone and the (to my mind artificial looking) lines in the torso. The result looks cartoonish in a way that detracts from the overall quality of the pose and the variation in surface textures, I think. I’m painting all the non-undead Ahmut’s figures with a mixture of Reaper Fair Skin and a drop of Vampiric Skin. I’m going over that with Vallejo flesh wash for shadows, then building up highlights with progressively more vampiric skin. This still leaves too much contrast in the brighter areas (though the shadows look great this way, I think), so I’m then covering the whole with a diluted wash of Vallejo gray wash and a drop of fair skin. The result is very nice, I think. 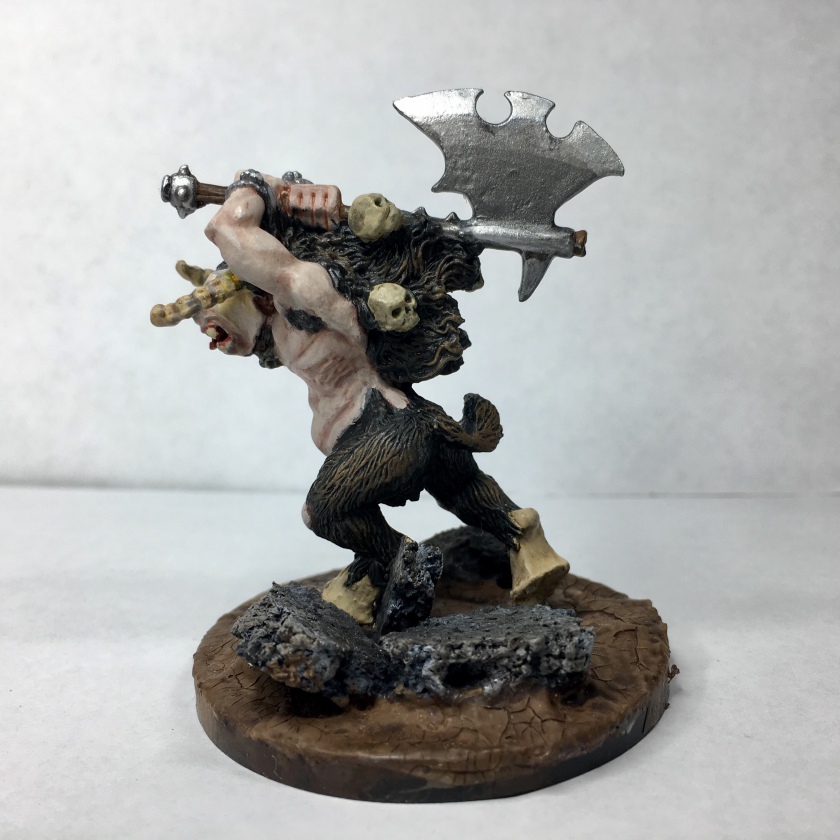 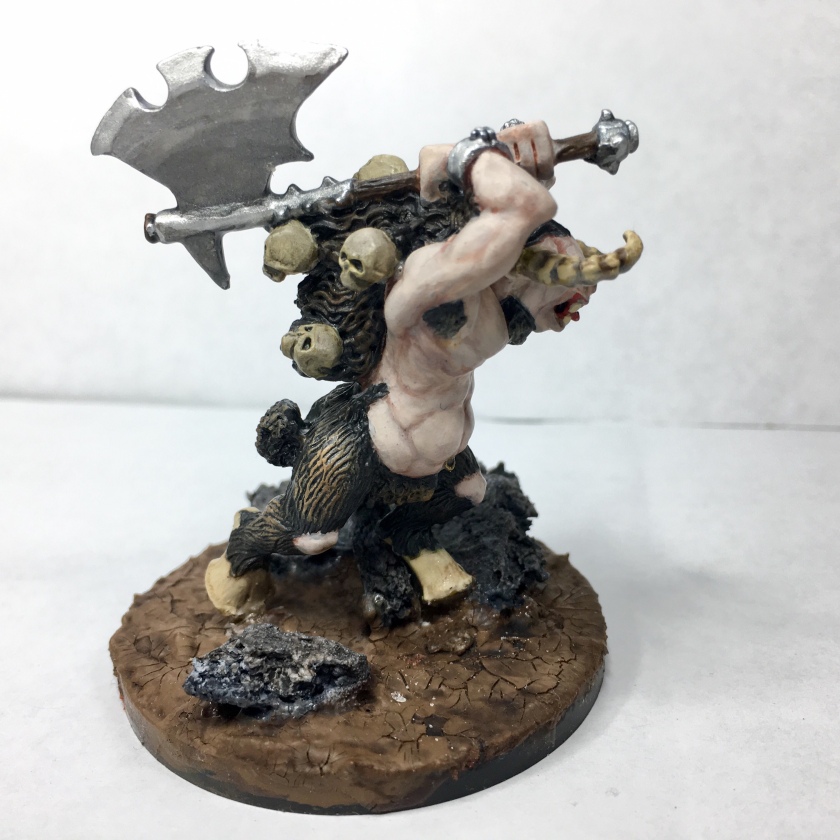 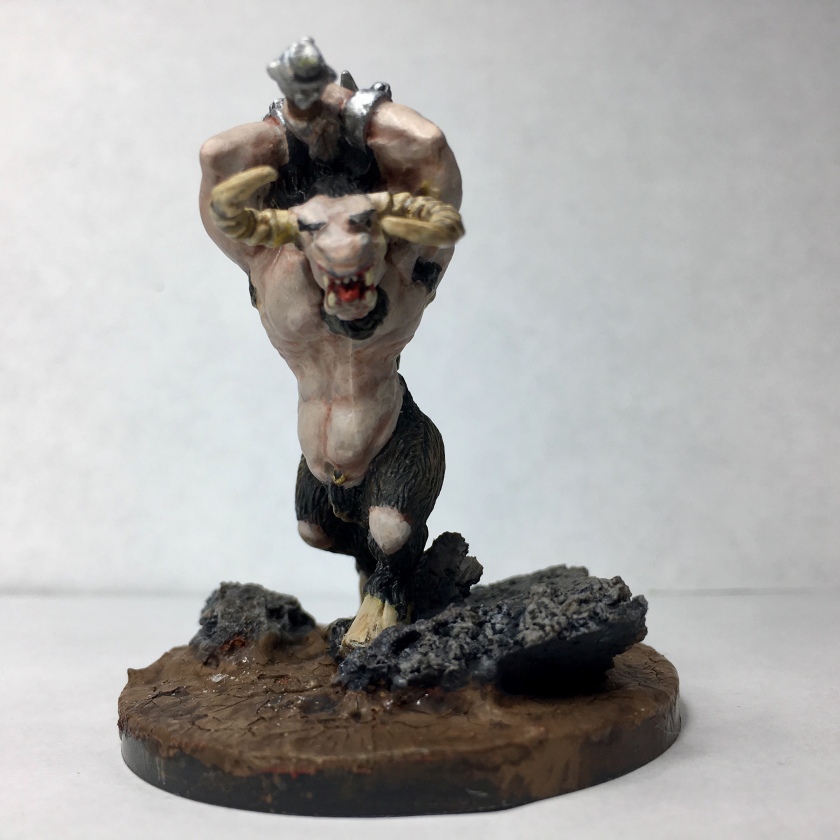 I like this pose a lot. It has the energy and drama that characterizes the best of the Chainmail poses. My one beef is that the head is separate from the beard. After pinning it, I built out the gap with some putty. But it still looks like he’s wearing a scarf. I don’t think it would have killed them to cast the head and beard as a single piece, to be honest.

Other than that, he’s pretty straightforward. I went for wet-blending on the axe, but you can see I didn’t quite nail it. The color transitions aren’t subtle enough, unfortunately. I think one of the horns is bent, but adds character that way, so I left it. I tried out my new crackle paint on the base. I think it looks pretty good. I left most of my basing stuff at home, so the Ahmut figures are going to be based in mud and bare rock.

I have a couple more to post: one today and another tomorrow. That should get me caught up, more or less.